From John McFarland on Shelfawareness December 1, 2008 - about a book that describes how easy it is to desensitize humans to shoot other humans.

Wafaa Bilal and Kari Lydersen tell two intricately intertwined stories in this provocative and illuminating book. One is a vivid documentation of a month-long interactive art installation (through diary entries and photographs); the other is a memoir of life under the tyranny of Saddam Hussein. Bilal, an art professor and Iraqi refugee living in Chicago, designed "Domestic Tension," a gallery installation that required him not only to be present without interruption for a month but also to be the target of paintballs fired by visitors to the Internet site he had set up. A real-time web cam allowed visitors to see the installation, choose to fire or not fire by remote control and monitor the damage done by themselves and others.

Bilal hoped that his project would comment on the nature of modern technological warfare and show what living in a war zone, always under attack, looks like. He noted that the technology used for his installation is the same as the technology that allows military personnel stationed at computers to drop a bomb on a target that is thousands of miles away.

In its month's life, the website received 80 million visitors, and more than 60,000 shots were fired at Bilal. Photographs illustrate the transformation of a pristine white gallery space into one submerged in yellow goo from fired paintballs. As Bilal observed, "It's an entirely man-made disaster. That's what war is."

Bilal also learned how cruel and malicious people can be in the anonymous world of the Internet. One hacker converted the single-shot paintball gun into a machine gun. The chat room set up to facilitate dialogue logged comments so hateful and off-the-wall that Bilal's experience became more intense than expected. "I seem to be filling quite a range of roles for different people," he wrote while dodging shots. "Symbol of the anti-war movement; lightning rod for hatred and racism; subject of intellectual discussion."

Counterpoint to details about the installation are Bilal's memories of his childhood, student days in Iraq and his escape from the reign of terror that Saddam Hussein visited on his country. His first-hand witness testimony is eye-opening and disturbing. Imagine family members recruited to spy on other family members and reporting back to the secret police. Imagine an unfounded accusation being sufficient to justify executing a person on the spot. "The motherland of my nostalgic memories doesn't exist any longer," Bilal lamented in this strikingly personal record of how a people who once loved humor so much now seem unable to laugh.--John McFarland
Posted by Terese Svoboda at 11:40 AM No comments:

Helen is publishing The Lonely Soldier: The Private War of Women Serving in Iraq with Beacon in April. Here is her terrific Huffington Post about veteran violence:

the hooks being the nine murders of women in Ft. Carson Colorado alone! The number of veteran suicides and attempts jumping six times since the Iraq War began!

After descrying the situation, she goes about making suggestions. Brava.
Posted by Terese Svoboda at 11:04 AM 1 comment: 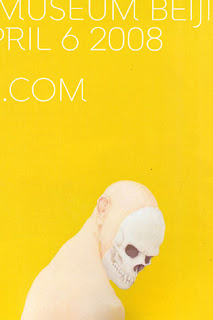 This fall U. of Arkansas Press is publishing my fifth book of poetry, Weapons Grade about occupations, past and present. I love the cover art, an image by Michael Kvium and am looking forward to what the wonderful designer Brian McMullen will do with it. The book will contain a long poem entitled "Secret Executions of Black GIs in Occupied Japan" to be published in the next Ploughshares issue.
Posted by Terese Svoboda at 8:36 AM No comments:

David Cozy at the Japan Times named Black Glasses Like Clark Kent to his "Best of Asia 2008" list--which is very short! Now if there were only more readers of English in Japan. 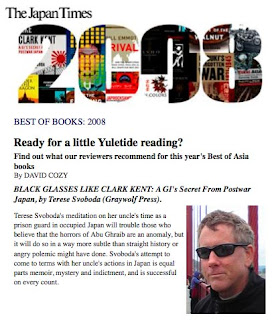 Posted by Terese Svoboda at 8:23 AM No comments:

Practically a movie already! 28 black veterans wait 64 years to have their names cleared in the lynching of an Italian POW in Seattle--and the last survivor dies right after hearing the Army apologize. All because Jack Hamann wrote On American Soil. My dream of course with Black Glasses.

http://www.npr.org/templates/story/story.php?storyId=93304327
Posted by Terese Svoboda at 8:12 AM No comments:

NOW THE HELL WILL START

A "non-fiction thriller" by Brendan Koernan about a black soldier fleeing WWII racism by hiding in the Burma jungle. Very well-documented, exciting chase and sad ending. But the book did get written.
Posted by Terese Svoboda at 8:10 AM No comments:

Somewhere in the shift of blogtech, I was lost--but now I'm found. Several posts to follow.
Posted by Terese Svoboda at 8:08 AM No comments: